Posted on December 3, 2016 by Kevin Wabaunsee 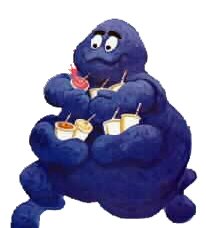 Early McDonaldland was a freaky place. Originally a transparent rip-off of Sid and Marty Kroft’s H.R. Pufnstuf program, the mythical McDonald’s realm was filled with anthropomorphized fast food products, volcanoes spewing milkshakes, and a recurring cast of villains attempting to steal food products from Mayor McCheese and Ronald McDonald, including the legendary Hamburgler.

One of the more disturbing trends in early McDonaldland commercials was the prevalance of casual cannibalism. Mayor McCheese, himself a anthropomorphic hamburger, would occasionally indulge in a hamburger grown from the hamburger patch, each of which were themselves also anthropomorphized. The Gobblins, later renamed the fry guys, were brightly-colored bundles of McDonald’s french frys, who roamed McDonaldland stealing and eating their smaller fry brethren.

But little can compare to the freakiness of the original incarnation of Grimace. Originally named “Evil Grimace,” the giant purple monster had four arms, and stole milkshakes from the various denizens of McDonaldland.

As ever, the Onion parodies the absurdity of the whole situation perfectly with the article McDonald’s Drops ‘Hammurderer’ Character From Advertising. From the Onion article: 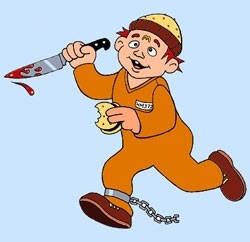 Bowing to outcry from consumers and parents groups, the McDonald’s Corporation announced Monday that it is discontinuing its new advertising mascot, “The Hammurderer,” a mischievous, homicidal imp who kills McDonaldland characters and takes their sandwiches.

This blog post is a reprint from a long time ago.