This post has some spoilers for my short story “Trusted Messenger.” If you haven’t read it, check it out — I think it’s pretty neat.

It’s been a week since Escape Pod published my story “Trusted Messenger,” and one of the most exciting and gratifying parts of the experience has been hearing what readers thought of the piece. I’ve had some really interesting discussions with family and friends about the story, and in addition, I was delighted to see the incisive readers at Escape Pod weigh in with incredibly detailed, thoughtful responses.

It seems like one of the most common reactions to the story is discomfort. Whether the reader liked the story or not (and not everyone loved it), a sense of unease or mild revulsion was a frequent component. I’m glad — my goal with this story was to explore an uncomfortable place for the characters and their morals, with a hefty dose of also-unpleasant alien biology. Escape Pod tagged my story “body horror,” which I suppose isn’t inaccurate. But rest assured this was occasionally an uncomfortable piece to write, as well — once or twice I shuddered with revulsion at the situation I’d written for the characters.

In addition to those themes, a few readers asked whether issues of power, consent and victimization were involved in the writing of the story. In short, absolutely. Among several other influences, one of the historical parallels that was fresh in my mind was the monstrous forced sterilization of thousands of Native American women in the 1960s and 1970s. As a story about medical ethics, I was very interested in exploring the power dynamics between a frontier doctor and his intransigent patient, and speculating about what might happen when human morality and ethics are confronted with a unprecedented — and alien — dilemma. 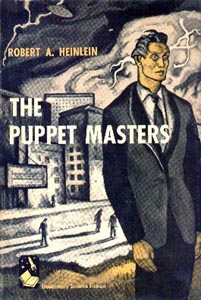 One of the difficulties I had writing the story was that in its earlier drafts, there was too clearly a “good guy” and a “bad guy,” and the story made obvious who was who. With every revision, I tried to muddy the waters of the situation — I tried make Suzanne’s decision reasonable and understandable, even if it meant, essentially, suicide and the certain death of her child, while also making Thad’s rather monstrous violation of his patient sympathetic from a lifesaving perspective. My goal was to heighten that discomfort by placing both terrible decisions on as equal footing as possible. Of course, I’ll leave it to the readers how successful I was in that goal.

Finally, one of my favorite parts of writing “Trusted Messenger” was to make that entire situation more worrisome and ambiguous by playing with the well-worn trope of the alien parasite taking over someone’s mind. Books like Robert A. Heinlein’s The Puppet Masters, and films like The Faculty rely on the idea of extraterrestrials that simply take over a hapless victim’s mind. For this story, I wanted something a little more quiet and uncertain, with a more subtle menace. As I was writing this story, I couldn’t stop thinking about the parasite Toxoplasmosa Gondii, and how it’s carried by cats, silently infecting the brains of mice and humans alike. In mice, it alters their behavior to make them more likely to be preyed upon. In humans, it’s been hypothesized that humans’ affection for cats may be partially due to the brain chemistry changes wrought by toxoplasmosis infection. I found that concept profoundly disturbing, and I wanted to speculate about what it might be like to fall under the influence of a parasite (or a mutalistic symbiont) that very subtly altered your behavior, silently making you want to help it and partner with it, instead of merely taking over your mind and tugging on puppet strings.

In the end, I’m impressed and humbled by the reactions and feedback I’ve received on the story. Now, it’s back to the keyboard to write another!