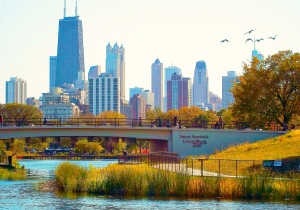 There are probably dead bodies in this photo. A lot of them.

One of my favorite things about living in Chicago is Lincoln Park. More than 50 percent larger by area than New York’s Central Park, Lincoln Park is truly is a marvel. It spans seven miles along Chicago’s Lake Superior shoreline, boasting gardens, sports fields, one of the nation’s largest free zoos, a conservatory, two museums, and as many as 10,000 dead bodies in shallow, unmarked graves.

Wait, what was that last one?

Yeah, as it turns out, Lincoln Park wasn’t always a public park. It started out as Cemetery Park and the city’s cemetery in 1843. For several decades, thousands of Chicagoans were interred in the land now used as a park, including 4,000 Confederate prisoners of war held at Camp Douglas, and thousands who died during the periodic cholera epidemics of the late 1800s. After the Great Chicago Fire, virtually all of the burial markers were damaged or lost (in addition to the thousands buried in unmarked Potter’s Fields).

While some graves were certainly moved during the transformation of Cemetery Park into its present-day form, it’s widely-known that thousands of those graves remain interred just feet beneath the running paths and baseball fields. In fact, as recently as 1998, construction in the park uncovered dozens of bodies just below the surface.

For much more on Lincoln Park’s storied history and its macabre legacy, check out Hidden Truths: the Chicago City Cemetery & Lincoln Park.

So be careful when digging in Lincoln Park: you may uncover more than you expect!